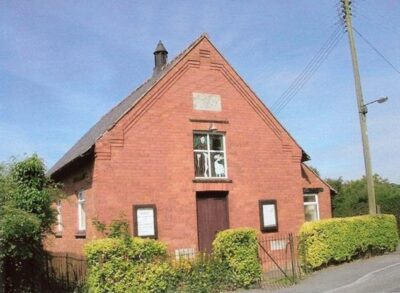 The chapel was opened in 1851 and was located at the bottom of Middle Road (map Ref. SO 959 756. The building served the community for over 40 years.

“Wildmoor is a small hamlet about a mile and a quarter north of Catshill. For want of a suitable place  of worship, our people here have long suffered materially; but during the last summer Mr. A. Rutter  built us a chapel 18ft. by 15ft. and let it to us for 50s, annually. Our friends have furnished it with  pulpit, benches, free seats, stove, etc. which cost upwards of £10., all of which has been raised. The  chapel was opened by brother Whitaker, of Ludlow; the congregations are good, and the cause is  prospering”. [Primitive Methodist Magazine 1851]

After providing a venue for worship and other activities for over 40 years, the congregation had outgrown the building, the premises were dilapidated, and it was decided to erect a building “suited to public worship and the demands of modern Sabbath school work”. [County Advertiser & Herald for Staffs. & Worcs. 24th June 1893]

Following its closure as a place of worship in 1894, the property became a dwelling (Chapel Cottage) and over the years has been modified and extended.  Between 2019 and 2021 the building, along with neighbouring Newcot Cottage, was demolished and rebuilt as a residential property.

It was known as the “Jubilee” Chapel as 1893/94 was the Jubilee of the Primitive Methodist Missionary Society.

The chapel design was by Mr. Ewen Harper of Barnt Green and Birmingham and the builder was Mr. Baylis of Belbroughton. A memorial stone was laid on 9th October 1893. [Bromsgrove Messenger 14th October 1893]

The chapel opened on 15th March 1894 – “The proceedings opened with a brief service in the old chapel (see below), conducted by Rev. T. Clamp. At the close of the service the old building was formally closed and locked and the audience then proceeded to the new church where the architect (Mr. Ewen Harper) handed over the key for the first congregation to enter singing the hymn ‘Hold the Fort’. There was a large attendance, the chapel being filled.” [Bromsgrove Messenger 17th March 1894]

The Bromsgrove Messenger says of the building (in 1894) – “A neat and substantial little Gothic building, 30ft by 19ft, capable of seating 120 persons. Cost about £300 including furniture”.

In the 7th August 2008 edition of the Bromsgrove Advertiser, the paper reports that Wildmoor Methodist Church would close on Sunday, August 31. Although it still had members, none of them lived in Wildmoor.

The chapel closed with a final service on Sunday 31st August 2008 and sold to a private owner.  The building currently remains standing and empty.