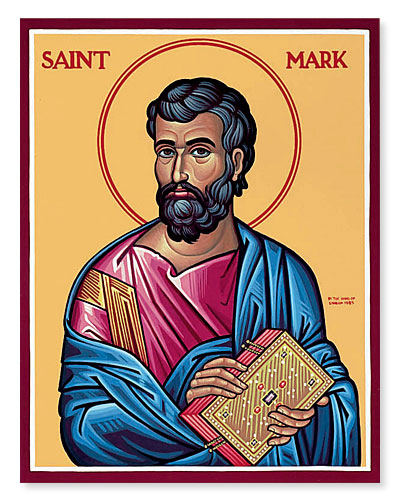 Our village church was named to honour St. Mark the Evangelist, whose feast day is on 25th April.

Mark was an Evangelist—one of the four men who wrote the Gospels found in the New Testament. Mark’s Gospel was written first, and it is the shortest description of Jesus’ life, Death, Resurrection, and Ascension. Mark’s writings helped both Matthew and Luke to write their Gospels.

Mark was not one of the original Apostles, and he probably never knew Jesus. Instead, it is believed that he was a member of the first Christian community. In his writings, St. Peter refers to Mark as his “son.” Peter may have used this term to show his love for Mark, or he may have used it because he was the one who baptized Mark. It is believed that Peter was the primary source for Mark’s Gospel.

Mark travelled with Sts. Paul and Barnabas to spread the Good News about Jesus. During his imprisonment in Rome, Paul mentions Mark’s concern for him and writes about how helpful Mark is in the ministry of helping others to believe in Jesus (Colossians. 4:10; 2 Timothy 4:11).

Mark founded the Church in Egypt and he became bishop of Alexandria, an important centre of trade and power during ancient times. He died there sometime between the years 68-74 AD as a martyr for his belief in Jesus.

Mark’s Gospel is a lasting treasure for all believers. He wrote his Gospel to help people know that Jesus was the Son of God who suffered and died to save us from sin and death. When we read Mark’s Gospel, we learn that to be a follower of Jesus, we, too, must be willing to make sacrifices, to “take up our cross and follow” (Mark 8:34) Jesus as he asks us to do.

The symbol for Mark is a lion with wings. That is because his Gospel begins with the story of John the Baptist, a “voice crying in the wilderness” (Mark 1:3), like the roaring of a lion. Lions are called the kings of the jungle. Mark’s Gospel tells us about Jesus’ royalty as God’s Son, a kingship we share through our Baptism.

We celebrate Saint Mark’s feast day on April 25 and he patron of Notaries, Venice, Barristers. His life and Gospel remind us to share the Good News about Jesus with others.

And all that old traditions tell

How, when the midnight signal tolls,

Along the churchyard green,

A mournful train of sentenced souls

The ghosts of all whom death shall doom

Within the coming year,

In pale procession walk the gloom,

Amid the silence drear.’

It was the custom in villages in England, from the 17th century to the late 19th century, to sit in the church porch on St. Mark’s Eve. Those sitting had to keep silent between the bell tolling at 11.00 p.m. until the bell struck 1.00 a.m. In Yorkshire it was necessary to keep vigil for three successive nights. On the third such sitting, it was said that the ghosts of those to die during the year would be witnessed passing into the church. This practice took place throughout England, but was most prevalent in northern and western counties.

Some accounts of the custom state that the watchers must be fasting, or must circle the church before taking up position. The ghosts of those who were to die soon would be the first observed, while those who would almost see out the year would not be witnessed until almost 1.00 a.m. Other variations of the superstition say that the watchers would see headless or rotting corpses, or coffins approaching. Another tradition holds that a young woman can see the face of her future husband appear on her smock by holding it before the fire on St Mark’s Eve.

O ALMIGHTY God, who hast instructed thy holy Church with the heavenly doctrine of thy Evangelist Saint Mark:

Give us grace, that, being not like children carried away with every blast of vain doctrine, we may be established in the truth of thy holy Gospel;

through Jesus Christ our Lord.